Pattern grading should not be confused with pattern alterations. Alterations are the process of making a pattern fit the nuances of an individual body. Whereas, grading is the process of creating a range of new sizes, or a size run.

Grading may simply be defined as the increasing or decreasing of a pattern according to a set of corresponding body measurements.  The secret to professional grading is to understand where the body requires these changes.[1]

Patterns can be graded using: the cut and spread method, pattern shifting or with computer grading.

We teach the basics of Grading in a 3 hour workshop at Thread Den – click here to read more. 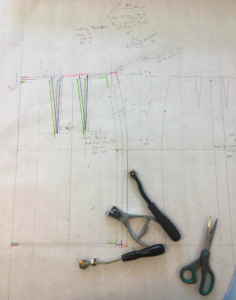